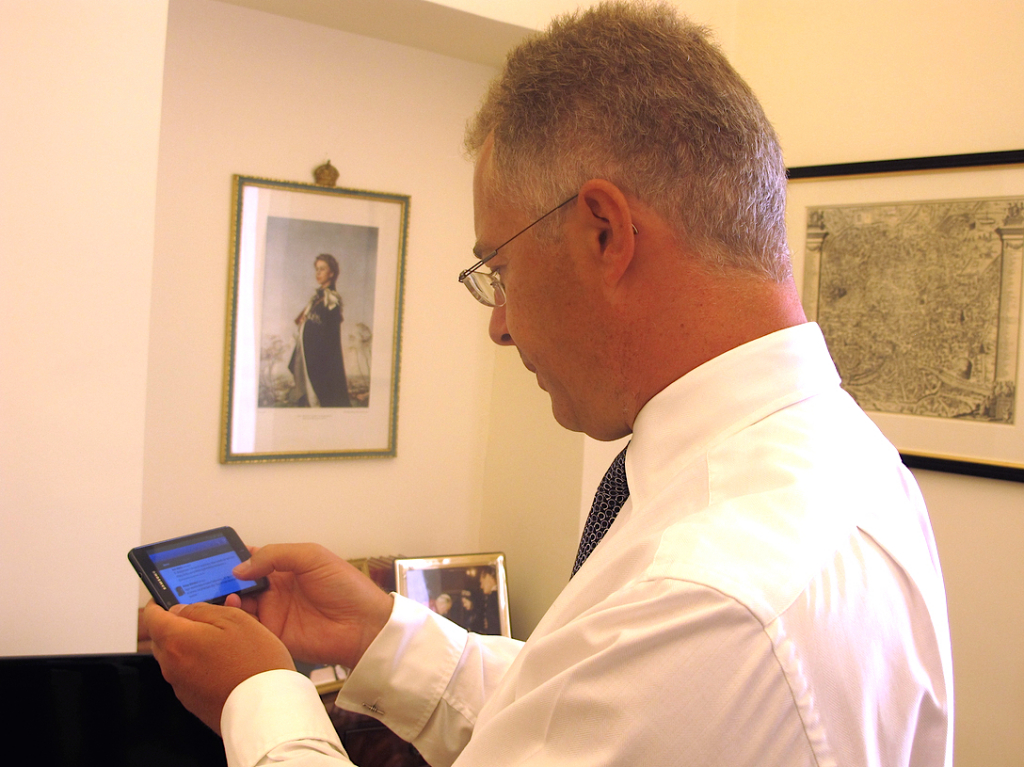 The Social Media Week, an international event dedicated to web, technology, innovation and social media, is underway. A week of encounters and experiences which, from 22 to 26 September, take place simultaneously in 11 cities in the world: London, Berlin, Johannesburg, Los Angeles, Sao Paulo, Sydney, Mumbai, Miami, Rotterdam, Chicago and Rome. A global and a local event, then. The theme is fascinating: Re-imagining human connectivity. At the same time, the Foreign & Commonwealth Office in London is organising a week of events around its global network, as part of a wider programme building the capability of its staff in using digital in communications, service delivery and policy-making.
Furthermore, from 22 to 24 September, the Committee for a reform of Vatican media will be meeting. The commission, which includes also members who are not internal to the Vatican itself , is drawing up a planning and a work method.
In this framework of events, I asked the British Ambassador to the Holy See Nigel Baker some questions, knowing his attention to digital diplomacy.

When and why the British Embassy to the Holy See has decided to establish a significant presence on social media? How did you came up with the idea, and what exactly this presence is made of?

As British Ambassador in Bolivia (2007-11) I had already seen the potential of social media. I had a blog in English and Spanish, mainly aimed at a Bolivian audience but which had readers from right around the world. I realised then that for an embassy with limited resources, social media was an excellent way of getting our messages out to a wider audience, as well as hearing what that interested audience had to say, and responding to it.

Isn’t some discretion linked to diplomatic work? How do you match digital communication and discretion?

Although discretion is still very much a part of any diplomat’s life and work, we must also be communicators, and ensure that what we do is relevant to the changing, dynamic world around us. For example, the British public, which pays for the embassy through its taxes, has a right to know what the British Embassy to the Holy See is doing on its behalf. What I realized in Rome, from the outset, was that there was a real challenge in demonstrating that this was an embassy not just focused on the internal business of the Vatican, but accredited and engaged with the most extensive global network in the world; the Holy See network.

Certainly not, it is the tool par excellence of the networked world, is therefore an ideal instrument for communicating with the Holy See globally, breaking down the hierarchies and mystique that unnecessarily surround the Holy See, and setting out our stall on the many issues with which Her Majesty’s Government is concerned in its dealing with the Holy See: from international development to the death penalty, the situation in the Middle East to our mutual concerns in Africa. My colleague in Beirut, Ambassador Tom Fletcher, sets it out very well in his own digital blog, The Naked Diplomat.

Has feedback from the public been positive so far? What did you learn from the replies received?

My initial conviction has certainly been confirmed by the response. My blog, carried on Foreign Office and commercial platforms, is I know read by many people in the Vatican and beyond. We have readers from the Philippines and Australia, India and the United States, as well as the United Kingdom; not an audience I could otherwise have reached. Since 2011, we have worked to make our Twitter account live, dynamic and interesting, and have used it to run a number of events from Q&A sessions to competitions – more than 6,300 followers suggest that it is working.

You talk about texts and readers, what about images? Aren’t they more powerful than a thousand words?

Image is vital to people’s understanding of the Holy See, and so both Twitter and Flickr are wonderful tools for visual communication.

We use LinkedIn both as a platform for the blog, as well as for developing a wider range of contacts. None of this is particularly revolutionary, and I have noticed that more embassies to the Holy See have started to follow our lead. It requires some effort, and resource, but I think is well worth it. My whole embassy team is involved.

Nowadays, we start to talk about Digital Diplomacy or eDiplomacy. The Foreign and Commonwealth Office has a strategy in this respect, and defines it as “solving foreign policy problems using the internet”. Could you please tell us a little bit more about this concept?

Some examples, if I may, The Foreign Office (FCO) keeps British nationals informed of essential travel advice updates and crisis information across all its digital channels – monitoring those channels, especially in crisis situations where social media allows us proactively provide those affected with real-time information, and responding to major queries. Ambassadors use social media to explain their work, to extend UK influence and to set the record straight when necessary. The FCO uses digital channels to help reinforce the objectives of major conferences, events and visits, for example carrying out extensive engagement with the Somali Diaspora in the run-up to a Somalia conference hosted by the UK, or the extensive digital engagement around the world during the recent conference on Ending Sexual Violence in Conflict. We have moved our human rights reporting online, allowing us to move to more frequent reporting and to invite comments from the public. The FCO funds projects to promote internet freedom. And last year we hosted a major conference to push forward international work on the future of cyberspace.

An intense activity, which we could define as a wide involvement of people at various levels, from interested citizens to experts…

Indeed. Internet gives us increasing access to people affected – directly and indirectly – by key international issues, and those who are influential in key debates. By listening and engaging with them we get a better understanding of what the issues are and how we can help solve them. We can also involve people more directly in our policy work, for example by crowdsourcing feedback on our Human Rights report. We can reach out to local subject experts via platforms like Twitter and LinkedIn to get a more nuanced view of how (say) trade, energy or social issues impact people differently in different countries. And as I have already mentioned, we can also use the internet to communicate our policy work better so that people can understand why we are doing what we do and how it is helping to deal with those issues. For me, the main question to be asked by any foreign service should not be: do we need to be digital? It should be: can we afford not to be in the digital space? For the UK, the answer is a resounding no.

What are the main advantages you could experience? Did you notice also problems or aspects to improve?

I think the main advantages include access to people with whom traditionally diplomats have not had contact (which can also be a challenge, because inevitably digital engagement means we expose ourselves to a wider world than the once closed “corridors of power”). It gives us a more nuanced understanding of the places, people and issues we are dealing with. An ability to target our messages more accurately, and therefore convey information in more appropriate ways to different audiences. Communication is now a two-way street: we listen as well as we talk, and this helps us to test policy ideas quickly and easily with wide variety of groups. An ability to respond more rapidly to changing events – particularly in a crisis. Again, something that can also be a challenge.

I suppose that listening has an impact on the services offered by your Government. Listening means paying attention to real requirements…

By listening, we can give British Nationals better access to services and transactions delivered by government. This is especially helpful when they are abroad. And it also means we can also use our extensive global network of embassies and other missions in a genuinely universal way. For example, when our team in London working on the death penalty wishes to get a message out to multiple audiences, they know that my embassy is plugging in to a broad, largely Catholic audience. At the same time, they can reach, through our other missions and their digital followers, completely different publics elsewhere. Perhaps for the first time, in this way, diplomacy – if digital is used well – becomes truly global.

I reckon it wasn’t easy to learn a new language, to inhabit the digital environment…

The challenges are real. The FCO is a massive organisation and this is a fast moving and evolving landscape so there will always be areas to improve. It has not always been easy to adapt to a new and more open way of talking about what we do, learning a new language to suit the platforms we are using, understanding better how to engage with people rather than simply broadcast messages. What I learned about my profession when I became a diplomat in 1989 remains relevant, but digital requires also that we do things differently and need to develop new skills – the secrecy and exclusivity of the diplomatic bag no longer applies! We need to develop a distinctive voice on an internet crowded with opinions.

And you need to understand when it is time to write, and the time to remain silent…

Indeed, we need to understand when not to write. Once out, our opinions can never be erased.

The Holy See has also a strong digital footprint and the Holy Father has a presence on Twitter. How do you value this presence?

Pope Francis was very clear in Evangelii Gaudium. If the Church cannot communicate its message, it is moribund. Its raison d’etre is tied up with the Gospel, the Good News, and I emphasise here the “News”. It, too, has to operate across a global network of multiple languages, cultures, ideas and opinions. One of the key difficulties for the Holy See before digital was that, too often, its voice was being interpreted, filtered and sometimes mistranslated by others – the global media – which as intermediaries were often heard more clearly than the original information source. Engaging in digital allows the Holy See to get its voice across directly. For a diplomat accredited to the Holy See, getting the unfiltered message, quickly and succinctly, is invaluable also for us.

Which were your thoughts when Benedict XVI decided to have a presence on twitter?

I was therefore delighted to see the Holy See Twitter experiment begin, and it has clearly been a success. Critics have said that complex messages cannot be transmitted in 140 characters. I think Benedict XVI and now Pope Francis have proved those critics wrong. First of all, the message does not need to be over-complicated. The discipline of paring down what we want to say to its essence is a valuable one – who was it who said that Jesus would have been very at home with Twitter? Secondly, the reach is truly extraordinary. Several languages, millions of followers, and with every tweet re-tweeted the Pope can reach 60 million people in seconds. We were delighted when Pope Francis decided totweet his support for my government’s efforts to end sexual violence in conflict with a tweet that had huge impact with all those involved, from governments to human rights defenders. As a great teacher, Pope Benedict saw the need. As a great communicator, Pope Francis has taken it to another dimension. That will surely continue. There is no going back.