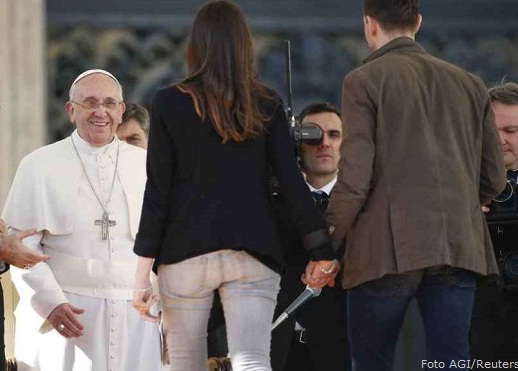 The Pope spoke to parish priests, that is, to pastors who have their hands in everything and who know well the concrete situations of people.  No one knows the varied reality of life better than they do.

And this is why he asks for the welcoming of those young people who prefer to live together without getting married.

But the Pope has done nothing more than to repeat what the Synod of Bishops 2016 approved with more than an 80% consensus (Relatio finalis, nn. 70-71, read below) and that is that one realizes that simply cohabiting is often chosen due to a general mentality against definitive commitments, but also because the couple is waiting for existential security (work and a fixed salary).

All these situations must be addressed in a constructive manner, trying to transform them into an opportunity to journey towards the fullness of marriage and family in the light of the Gospel.

Rather, in many circumstances, the decision to live together is a sign of a relationship that needs to be directed to an outlook of stability to which it is important to focus.

THE FINAL REPORT OF THE SYNOD OF BISHOPS TO THE HOLY FATHER, POPE FRANCIS, 24 October 2015

70. In some countries, […] an increasing number of those who have lived together for a long period of time ask for the celebration of marriage in Church. Oftentimes, the choice of simply living together results from not only a general aversion towards institutions and making firm commitments but also an expectation of a sense of security in life (awaiting a job and a steady salary). And finally, in other countries, de facto unions are becoming more numerous, because of not only the rejection of the values of family and marriage but also, for some, marriage is seen as a luxury due to their state in society. Consequently, in the latter case, the lack of material resources forces couples to live in de facto unions. All these situations must be addressed in a constructive manner, attempting to turn them into opportunities leading to conversion and the fullness of marriage and the family in the light of the Gospel.

71. The choice of a civil marriage or, in many cases, simply living together, is often not motivated by prejudice or resistance against a sacramental union, but from situations or cultural contingencies. In many circumstances, the decision to live together is a sign of a relationship which wants, in reality, to lead to a stable union in the future. This intention, which translates into a lasting, reliable bond, open to life, can be considered a commitment on which to base a path to the Sacrament of Marriage, discovered as God’s plan in one’s life. The path of growth, which can lead to a sacramental marriage, is to be encouraged by recognizing the traces of a generous and enduring love, namely, the desire of a couple to seek the good of others before their own; the experience of forgiveness requested and given; and the aspiration to form a family not for itself but open to the good of the ecclesial community and all of society. While pursuing these goals, value can also be given to those signs of love which properly correspond to the reflection of God’s love in an authentic conjugal plan.