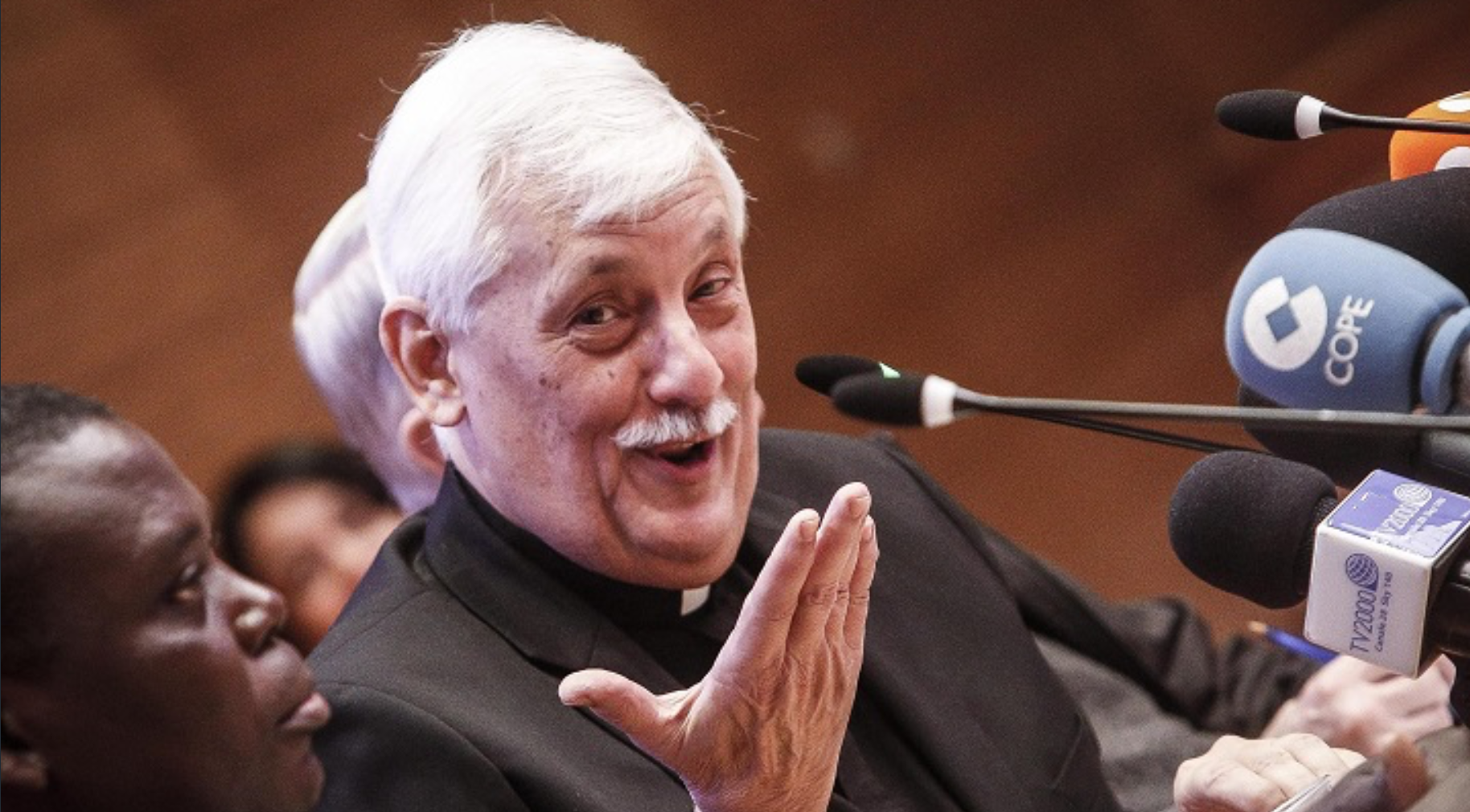 Arturo Sosa was my “desk companion” during the General Congregation.  He told me a few days before the start that he would be seated next to me.  In the days before his election, we talked of many things, some perhaps unimportant, others more serious.  I sensed, however, a person next to me with a lot of energy and serenity.  A resolved person, reconciled with life and his experience of the past.

On the day of the election, we had exchanged few words.  The climate was of silence and profound interior recollection.  I showed him the notebook in which I was taking some notes.  On the cover was imprinted a phrase of St Ignatius: “Go forth and set the world on fire”.  His comment was: “Yes.  But today the world is already in flames, and unfortunately in another sense…..” 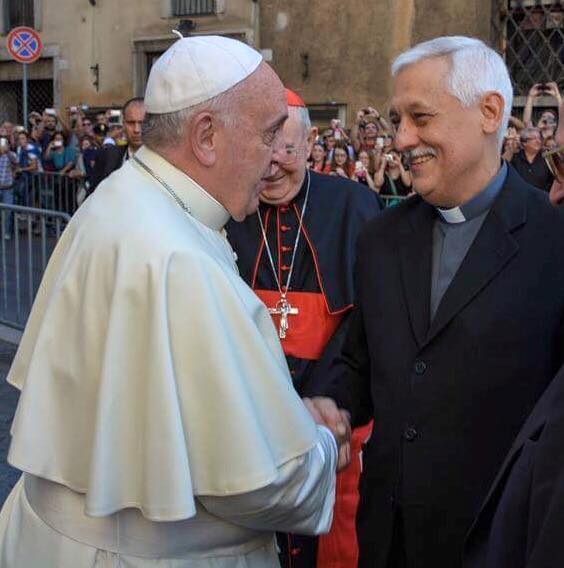 One day we spoke about Pope Francis.  He told me he met Jorge Mario Bergoglio during the 33rd General Congregation in 1983.  Arturo was just 35 years old:  he was very young to be a “congregation father”.  Bergoglio—who then was 47 years old—saw him as young and robust.  This is why he gave him a nickname: “potrillo”, that is “colt”.  The recommendation that the Pope made at the news of his election to the General was: “be courageous”.

The day of the election we were all dressed well.  He had on his suit and clergyman black that “stood out” well with his white mustache and hair.  I noted that both his beloved plaid shirts that he brought and the dark suit that he brought didn’t change his behavior.  So I’d always known him:  as a person capable of being himself and at ease in the most diverse situations.  The counting of the votes by now indicated that his election was imminent.  He was as serene before the beginning of the voting as he was the day before…  Almost without think I extended my arms to comfort him for the weight that was falling on his shoulders.  I realized that I was embracing him.  He, serene as before, just whispered something like:  “when the chicken is to be eaten, you need only to boil the water…” 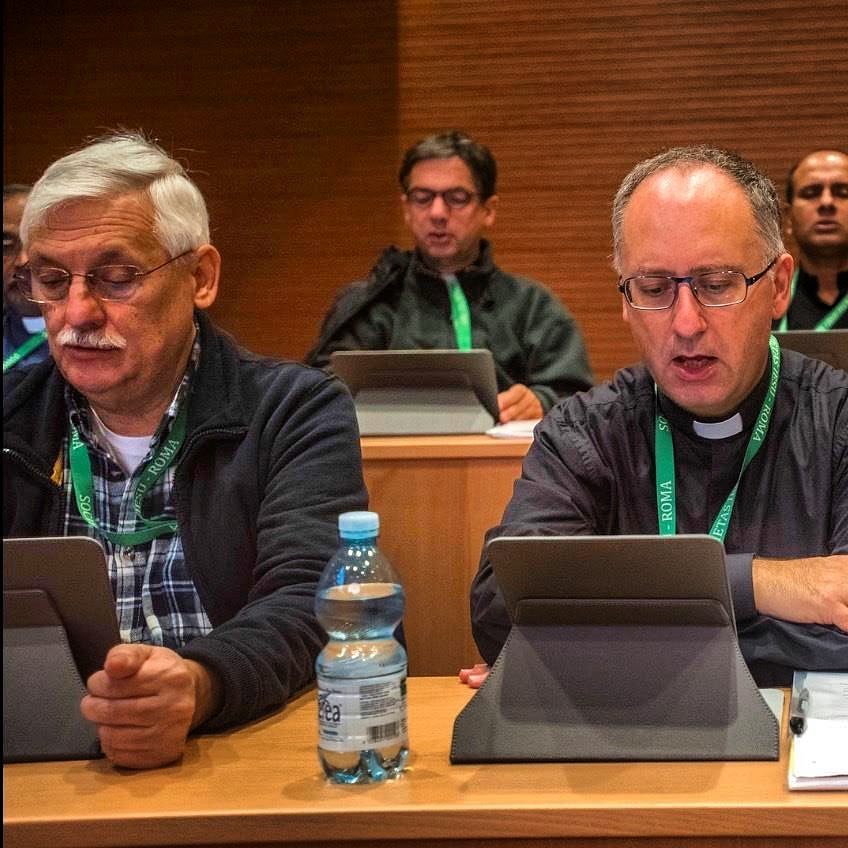 Even after the gathering of the number of needed votes, he was not discomposed.  He continued to write something in his notebook.  Until, the vote counting concluded, a round of applause started and the hands of the brothers embracing him and applauding him had not completely surrounded him, I had time to whisper in his ear: “You are our Father General”, emphasizing with my voice the word “father”.  And then: “Always be a father”.

Arturo Sosa is then the new Father General of the Jesuits.  He is 68 years old and a Venezuelan.  We well know what strong tensions they have experienced in Venezuela, tensions that he has experienced first hand.  Venezuela is one of the “peripheries” about which Francis has talked.  The “black pope” is proof that the very peripheries where tensions simmer, can convey energies to put at the service in the center of the Church universal.  People like Arturo Sosa have experienced such tensions through which at the end the spiritual energy of their personality flows calm, serene, without tensions.  Mature.  People like him don’t have to prove anything to themselves.  They have already done so, perhaps.  They gambled.  They have now won and now lost.  They took the walls by headbutts. They have even had ideological passions arriving then at near nothingness in their inconsistency.  Thiers is no longer an ideological critique of ideology, but a hand-to-hand combat with the reasons why it’s worth spending (and sometimes losing) their lives.  Now these people like Sosa, like Bergoglio, can bear the weight well without taking to many measures.  They can even resist the bewitching bureaucracy of power by remaining themselves. 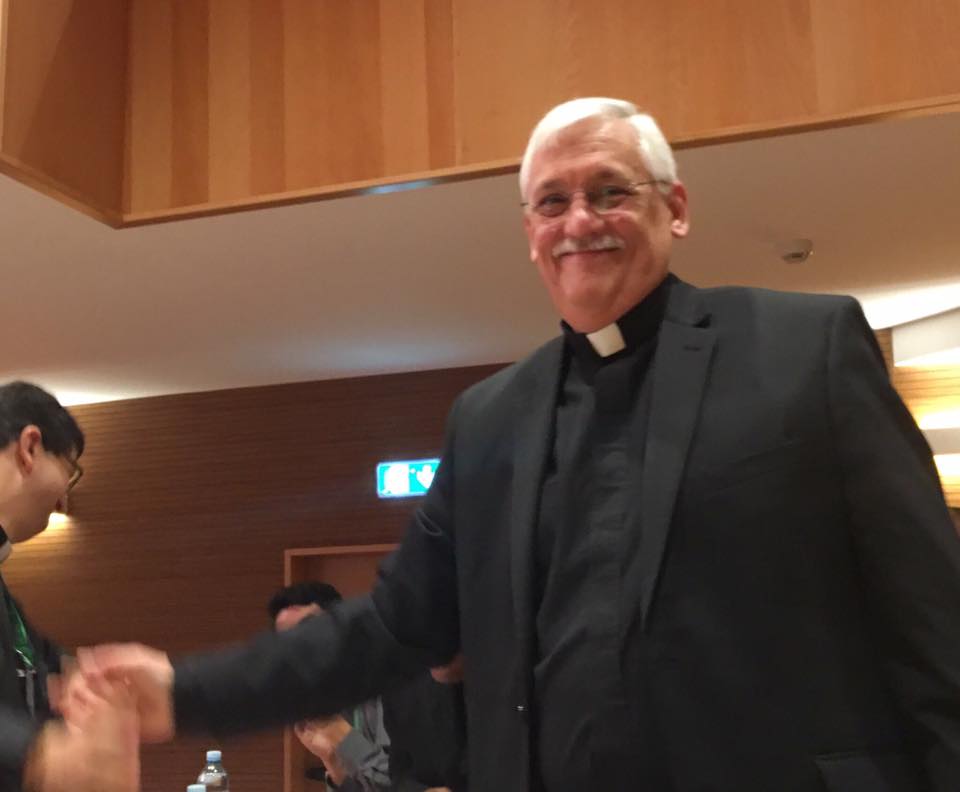 And Sosa, like Bergoglio, is from Latin America.  Their countries—Venezuela and Argentine—are certainly two different countries.  And moreover, they witness together that the Church of that subcontinent is a “source” Church, and not a reflection, capable of bearing mature fruit for the universal Church.  Also for that of the European Church, and without contrasts, because they have European roots in their blood:  Bergoglio in the Piedmont of Nonna Rosa, Sosa in the Spain of Santander of his maternal grandfather, a tailor passionate about bulls and bullfights, who died at 104 years of age.
In the homily at the beginning of his mandate, Arturo Sosa said of the Jesuits something which can cause all to reflect.  He said that we must leave the fears behind that we feel and we must be creative and audacious, we must take the bulls by the horn.  He understood that the problem is simple: we make mistakes because we act motivated by fear.   And then Sosa had the courage to say in his first homily as General:  “We also want to contribute to what today seems impossible: a Humanity reconciled in justice, that lives in peace in a common home well cared for, where there is a place for all of us because we recognize our brothers and sisters, sons and daughters of the same and one only Father”.   He spoke of the “audacity of the impossible” that flows from faith.  Only a man who has gone through the ideologies knows that you must not be afraid of utopias if they are able to supply the gasoline to move forward in the building of a better world.  In a time in which one lives fears and disappointments, in a time in which you only take account of secure things, with few certainties at your disposal, Arturo Sosa invites us to not lose that healthy utopia that allows us to believe that the world is not destined to perdition and that it is possible to work to make it what the Lord wants it to be.

This is why, deep down, Sosa was an intellectual—professor of the Theory of Politics and Rector of a university.  Because he wanted to understand how the world goes, how it functions, what makes it turn in the opposite direction in its orbits fixed by God’s plan.  He said in his first homily at the Church of the Gesù, dressed in the same liturgical vestments worn by Francis for his first Mass with the Jesuits: “Thinking to understand in depth the moment of human history that we live and to contribute to the search for alternatives to overcome poverty, inequality and oppression.  To not cease thinking to propose the pertinent questions to theology and to deepen the understanding of the faith that we ask the Lord to increase in us”.

He had written in 2008: “The Society of Jesus does not hide the complexities of the problems that afflict human beings and the multiple bridges that it is necessary to stretch to overcome the barriers between the social classes, ethnicities, religious differences or of gender and many others that prevent and block reconciliation among human beings.  One of the characteristic traits of the Society of Jesus since its foundation has a special importance: the commitment to the intellectual apostolate through which it can effectively contribute and fully understand the mechanisms and connections of real problems, a condition without which it is not possible to build the necessary bridges to facilitate reconciliation with others”.

But Arturo Sosa was not solely an intellectual.  He was and is a man of government.  He has participated in four General Congregations, and was Provincial of Venezuela, he served on the Council of Father Generale Adolfo Nicolás, and lastly he was responsible for the international houses of Rome.

Between local and international commitment, the key word for him was “frontier”.  He wrote: “The frontier in the life of persons and peoples is a challenging sign.  It represents the limits of reality itself or the limits of the other.  It represents, at the same time, the possibility of going beyond the initial limits, and moving towards less familiar areas and ideals.  It represents the challenge of transcending what we are, to draw closer to what we should be, and, finally, to open ourselves to the totally other, to God”.

Sosa’s discourses end up always in God.  You can easily understand him:  this man of government, this intellectual, this man of ignited and resolved tensions, is a man of God.  First of all he is a spiritual man who reminds the brothers who have elected him that they must have: “the whole heart that we want to have in tune with the Merciful Father”.

What is the Society of Jesus for Arturo Sosa?  We will understand that better in the near future.  For now it is enough to quote one of his dazzling definitions of eight years ago: un grupo mínimo para la magnitud de lo que se propone (“a minimum group for what is proposed”). 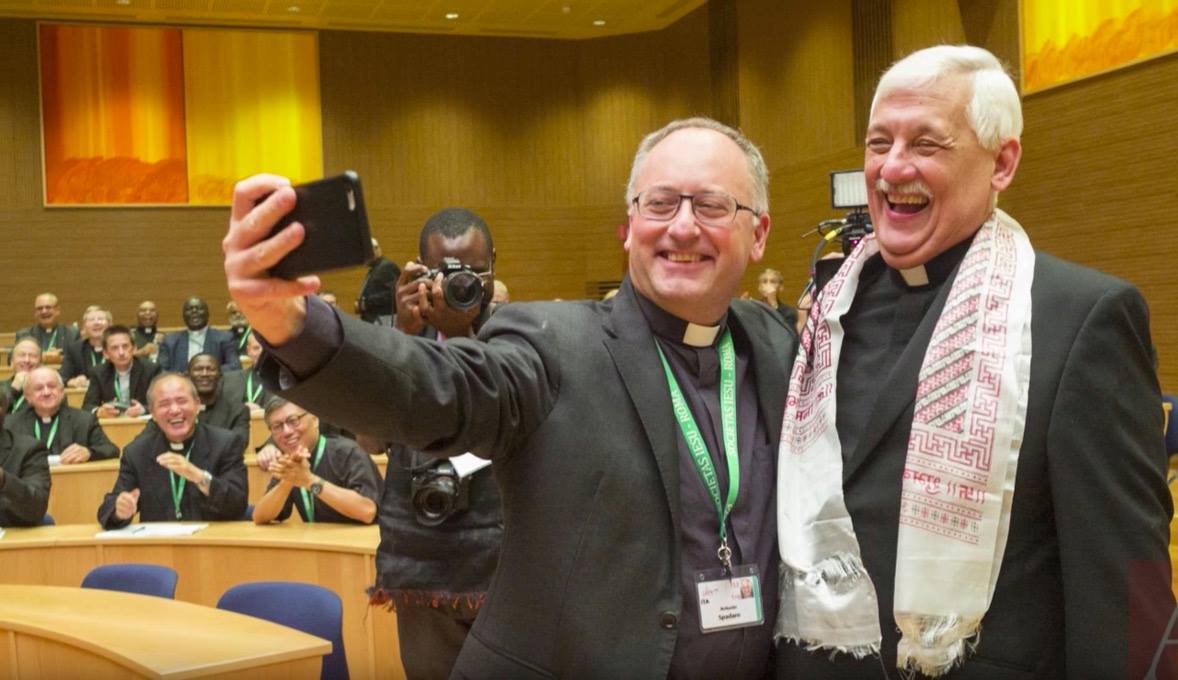 (translation by Reyanna Rice from the original text in Italian)