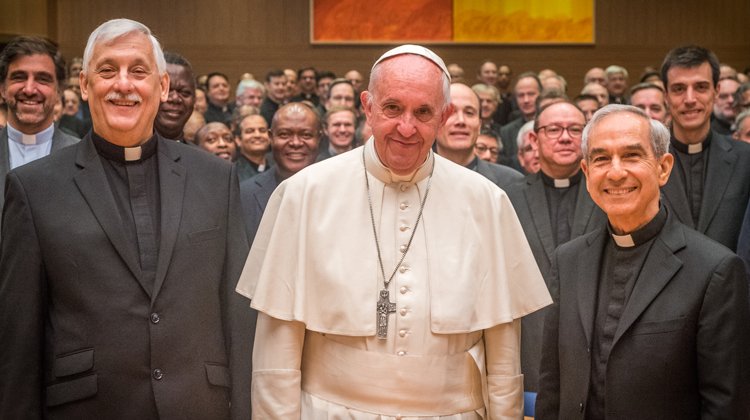 The petrine ministry of a Jesuit: a positive challenge for the Society

The Pope entered naturally like a Jesuit father among others.  But his white cassock marked a visible difference.  But it did not take away the perception that there is a deep bond between us and him.  We began by praying.

A historic event: this was the encounter of General Congregation of the Jesuits with Pope Francis.  The first to be aware of this event was precisely Father General Arturo Sosa who asked the Jesuits to prepare themselves spiritually for this encounter.  It’s never happened that there was a Jesuit Pontiff intervuenes at a General Congregation of the Jesuits.  His discourse then assumes for the Society a truly strong, special value.  But, even before his discourse, it is the presence of the Pope itself to have an extremely meaningful value, also for its unusual modality: an audience in the Hall of the Congregation itself which lasted for hours of free and spontaneous encounter in an open and relaxed climate, as perhaps had not happened for a long time.

The Society is taking greater awareness that the petrine ministry is today carried out by a person formed in its womb and its spirituality, that of discernment.  Many characteristics of the current pontificate, moreover, are understandable in their roots only by considering the spirituality in which the Pontiff grew humanly and spiritually.  Therefore, Francis represents a positive challenge for the Society, and a specific incentive of prayer, reflection and assumption of responsibility. 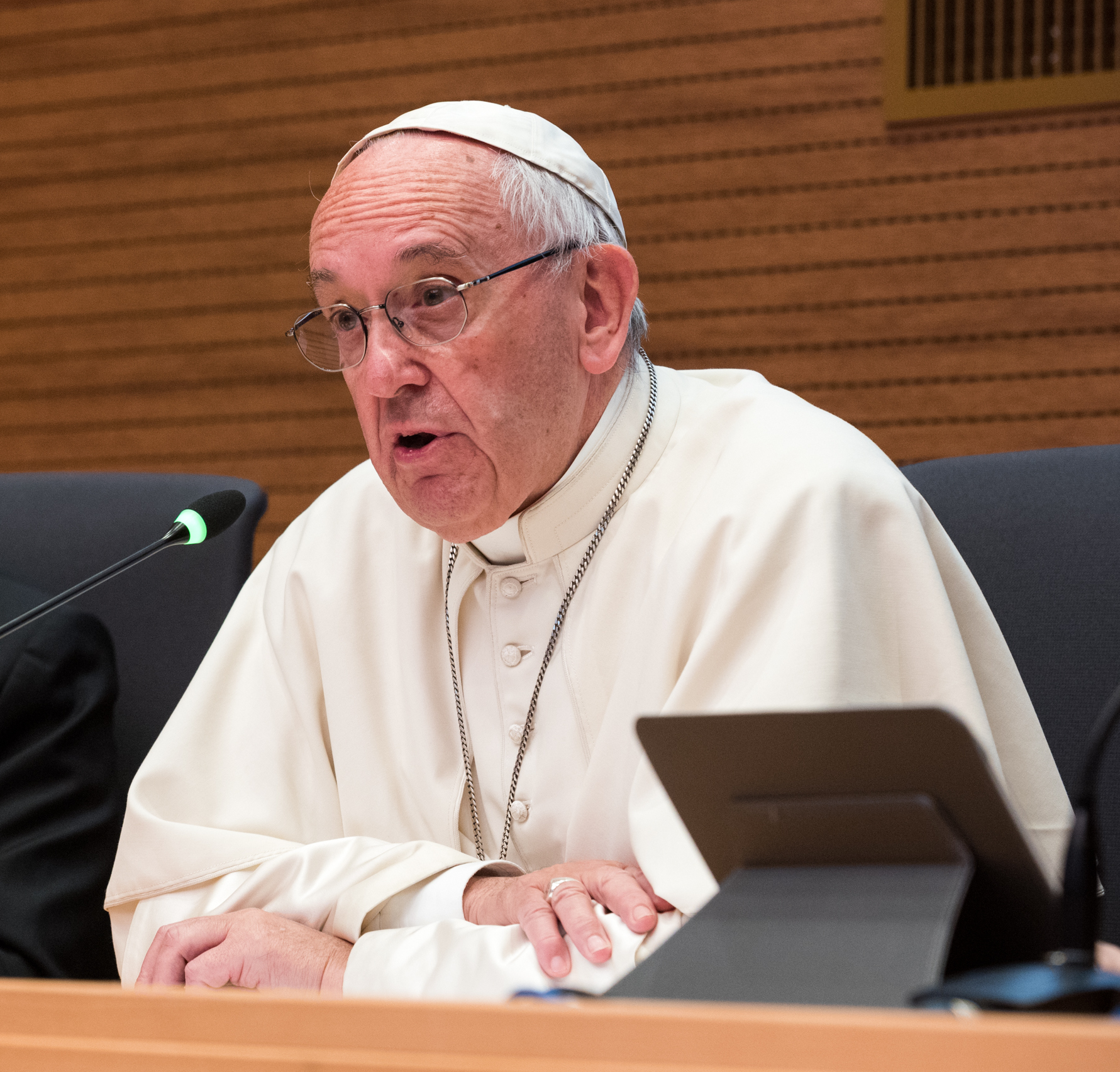 A “blurred” portrait of the Society of Jesus

The Pope began his discourse by painting a portrait of the Society.  That it is not a “still life” but a multifaceted framework and in motion.  The Society itself—he said—is “in progress”, in becoming.  This makes it flexible, freely elastic.  He immediately framed it—also in the light of his predecessor’s statements—in journey as free and obedient people.  And you walk only if you truly get down on the street.  The Society cannot balconear, as he once said:  you cannot look at reality from a balcony, study it, analyze it and, still from the balcony, sentence it.  We must enter inside it, stay at the crossroads of history, at the social front lines, there where there is the «confrontation between the deepest desires of the human person and the perennial message of the Gospel», as Pope Paul VI said.  Reflection, contemplation and action are always together if we do not want to be ideological.

Not fixed objectives but mobile horizons

But it is not enough to walk.   Where must you go?   In his discourse to the Congregation, Francis implicitly warned us about holding too many clear and distinct objectives as in business planning.  The horizon that orients the journey is the Glory of God who is always greater, he said.  That is: the Society must walk having before itself a horizon that changes continually and enlarges.  The portrait of the Society painted by the Pope is then dynamic, «incomplete» in itself and «open».  The Jesuits are called not to «reach objectives» like in a shooting gallery, but to walk, evangelically accompanying the processes in which human beings are involved and having as a horizon line the glory of God.  Accompanying horizons not conquering spaces.   It is, in essence, walking with the Lord Jesus:  we are called to walk with him and to go where he goes.  And at times we don’t even know where he is going.  We discover it by walking, ready to change direction, moves and methods with him.  Only if the Society walks with Jesus towards the horizon is it able to understand itself.  The Society is mobile.  This is why for the Jesuit, any place in the world is home.  If it is not he becomes «functionalist» and rigid: he is tangled,  that is he begins to concentrate turning round and round himself but at the end uselessly.

Only one «priority»: discernment

This walking however is a journey neither comfortable nor solitary.  It is not a journey to find oneself, not even for one’s own personal salvation.  Francis tells us that to walk in Ignatius’ words means first of all «to labour strenuously in giving aid toward the salvation and perfection of the souls of their neighbours” (General Examen, I, 2). The Pope seems to favor the original «Formula of the Institute», that of Paul III of 1540, Regimini militanti Ecclesiae, that puts as the focus before the Society that of concerning itself «in the progress of souls in life and in Christian doctrine».  Therefore, the Pope doesn’t entrust to the Society objectives or preferences if they are not for the «progress of souls».  He does not provide lists of works to be carried out or objectives to reach or territories to «conquer».  Rather he simply says that the Society «is where it needs to be».  Although with prophetic and diplomatic audacity.  And where is that?  The answer is that the content of the mission is the fruit of a continuous discernment and always in development.  The center remains the «Formula of the Institute»:  the rest belongs to history, to becoming, to the circumstances.  The Society lives and must live tensions, it is restless.  Francis wants to touch the beating heart, the hot and powerful core of the Society’s charism, the «Formula» exactly:  he removes the layers that protect it and he shows the Jesuits the essentials to remember.  The Pope speaks of a return to the heart, or rather of a «fire».  And he quotes one of the first Jesuits, Fr. Jeronimo Nadal, who said: «The Society is fervor» derived from the Latin fervor, that is «boiling». 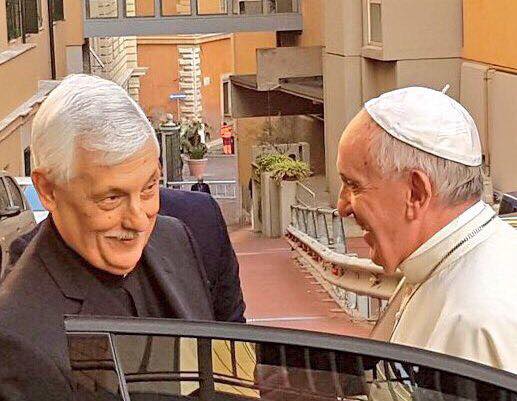 This much said, the Pope provides as well three «ways of proceeding» for the mission that he summarizes in three words: «consolation», «compassion» and «feeling with the Church».  The expression used by Francis is of note: podemos dar un pasito adelante that is «we can take a step forward».  It is not the invitation to take the «long jump», but to take a step at a time, one after the other.  But always adelante, forward.   There is a progress to which we are always called, and that is to do with humility and decision.  Here’s the three ways:

At the end of this discourse, Francis turns to Mary with the appellation of «Our Lady of the Street».  The Society is not only a group of men with the same ideals, but a group of friends who are on the street in journey with Jesus, a step at a time.

At the end of our encounter, the words of a letter of Ignatius on the occasion of the election of the Pontiff Marcello in April 1555 came to mind: «To Our Lord God, who wanted to give to his Church such a leader, please increase in him a great spirit, as it is necessary in so high a ministry».

(translation by Reyanna Rice from the original text)